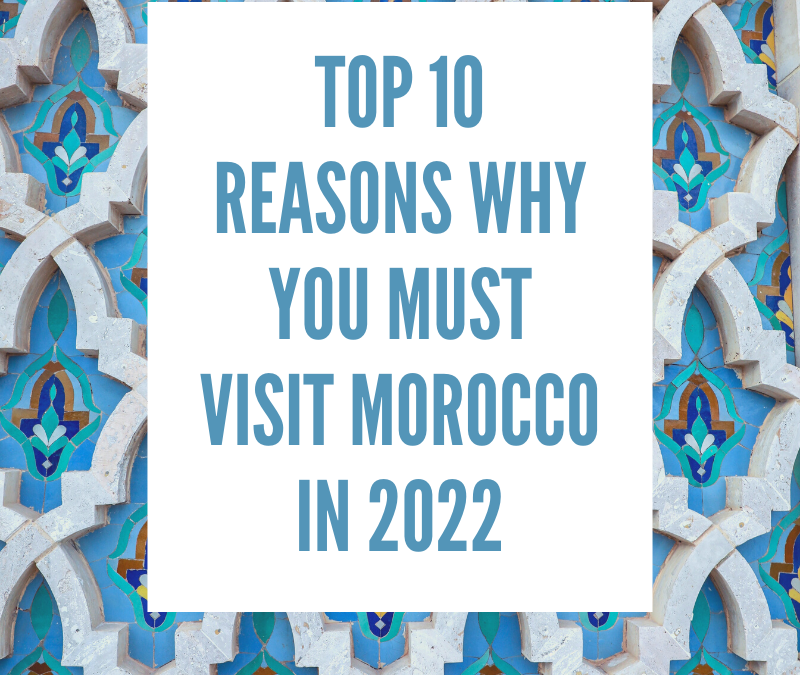 Ok so I’m a bit biased whenever I talk about Morocco since, in a way, it’s “home” for me. So I’ll try to keep this list as objective as possible.

No such thing. I’m about to tell you, from my heart, why you simply can’t miss Morocco in 2022!

1-   If you’re a fan of “Game of Thrones”, you’ve probably wondered where the Slaver’s Bay is in real life. Well, guess no more. It’s in Morocco, and more precisely in Essaouira. The South of Morocco is home to Studio Atlas, the world’s largest movie set where other Hollywood mega productions are filmed every year, including “Jack Ryan”, “Mission Impossible 3”, “Bourne Ultimatum”, “The Bible Mini Series”, “Babel”, “Black Hawk Down” and “Alexander”, just to name a few.

2-   What country can offer its visitors the opportunity to ski on the highest peaks of North Africa (Toubkal Mountain at 13,671 feet), swim both in the Atlantic and Mediterranean Seas (in the city of Tangier), and ride a camel in the world’s hottest desert (the Sahara)? If your answer is not Morocco, then I don’t know what to tell you! Morocco is clearly a land of contrasts with something for every taste.

3-   Moroccans are renowned for their hospitality. According to a CNN article, Morocco ranks #3 in the world as the most welcoming country for tourists.

4-   According to the World Tourism Organization, Morocco is currently the number 1 destination in Africa, followed by South Africa and Tunisia. This means that not only is Morocco safe (the Arab Spring wave did not disrupt Morocco’s climate), but it has great infrastructures and a level of comfort and familiarity for the less adventurous travelers.

5-   Travelling to Morocco is relatively cheap in comparison to other African destinations: You can book a flight from New York to Casablanca for about $500 during the low season and about $900 during the high season.

6-   Morocco is a crossroad of Berber, Arab, and European cultures and these diverse influences show in the architecture, food (Couscous being a national dish cooked every Fridays), and even the languages spoken in each region. In terms of education, Morocco is home to Al-Qarawiyyin University, the world’s oldest (Founded in the city of Fez in 859).

7-   Because everybody wished they were Humphrey Bogart or Ingrid Bergman in Casablanca, one of the greatest movies of all time.

8-   What could be more patriotic than visiting the country that holds the longest unbroken treaty with the United States of America (Treaty of Peace and Friendship ratified in 1787)? In fact, Morocco was the first country to recognize the new United States back in 1777 and the city of Tangier is home to the oldest U.S. diplomatic property in the world.

10-  Last, but certainly not least, because you have the chance to experience the true beauty of Morocco when you join the Majestic Morocco Retreat, March 5-10, 2022. This unique retreat is for ambitious female entrepreneurs just like you who are tired of scrambling and overthinking their content marketing. Imagine, 6 days to get pampered like a queen and get your content done.

You’ll come back home rejuvenated but also with 90 days worth of content planned out.

But here’s the thing: I’m only taking 8 ladies with me! So if you want to claim one of the remaining spots, you need to apply fast right here.